I have been busy and so it is timely to provide an update on some of my stores on CafePress and Zazzle. 1. What started off as a showcase for gift items incorporating Pre-Raphaelite art now has a rapidly-growing section devoted to the work of some artists from the Art Nouveau Movement. What brought this about was the discovery that some Art Nouveau and Art Deco items were listed as 'best-sellers' and so I decided to create some offerings aimed at meeting the demand. 2. On Zazzle I redesigned Poe Gifts to be a little more Poe-esque rather than have the plain vanilla off-the-peg store. I still view it as a work-in-progress and may tweak it after I have finished on the current phase of the Art Nouveau project. 3. I also gave PreRaphaeliteArt its own identity and store design. There is still much to be done in terms of populating it with items but I do like the design and I hope that visitors will find it attractive and be enticed to buy from it.
Posted by Neil at 9:36 AM

The opening of the Pre-Raphaelite exhibition at the Tate brings to mind what I believe to be one of the finest stained glass window designs by the two great Masters, Edward Burne-Jones and William Morris, who were right in the midst of the Pre-Raphaelite Movement. The window is in St Martin's Church in Brampton, a small, Cumbrian, market town just 9 miles east of Carlisle. The church is popularly known as 'The Pre-Raphaelite Church', partly because all of the stained glass is by the Morris Company, using designs by Burne-Jones, Morris and some later designers, and partly because the church itself was designed by Philip Webb, a Pre-Raphaelite architect. The design that I wish to showcase here is 'The Pelicans' by Burne-Jones with foliage by William Morris. It forms the centre of a 5-light window which was commissioned by George Howard, a close friend of Morris, in memory of his father, Charles. The design is the subject of one of the funniest entries in Burne-Jones' book of accounts, which is more of a diary than a set of accounts, I would quote it here but can't locate the file so it will have to wait for another post. As you are probably aware stained glass designs are often re-used several times over in different windows and this was certainly true of designs by Burne-Jones and others who designed for Morris Company. Contrary to this practice 'The Pelicans' was only used once, probably out of the respect shown by Morris for George Howard and his father Charles. It is my belief that this is one of the finest Morris windows, both in design and execution but you can judge for yourself.
Posted by Neil at 5:02 AM

Email ThisBlogThis!Share to TwitterShare to FacebookShare to Pinterest
It's that time of year...October 7th, anniversary of his death in Baltimore in 1849 and then Halloween. So, to mark the occasion, here are some Edgar Allan Poe gift items:
See other gifts available on Zazzle.

Email ThisBlogThis!Share to TwitterShare to FacebookShare to Pinterest
The Pre-Raphaelite Exhibition at the Tate in London is well underway and is receiving rave reviews. I was lucky enough to see the last one, in 1984, by routing a business trip through central London. Sadly, barring a miracle, I am unlikely to be able to see the present one. I have, however, designed some gift items incorporating some of these great works of art.
Browse other gifts from Zazzle. 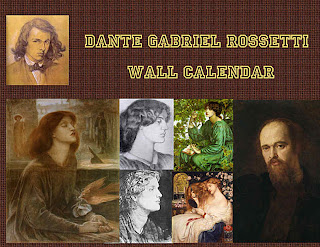 ....calendar time! Time to relaunch old calendars with a new year on them, time to design new ones. So far I have launched 5 brand new, never-seen-the-light-of-day-before, calendars. Three are devoted to Edgar Allan Poe - actually to illustrations of Poe stories by Harry Clarke. As well as being one of the top 3 Irish stained glass makers of all time (don't ask me who the other two are), Clarke was a superb book illustrator whose work embellishes two editions of Edgar Allan Poe's Tales of Mystery and Imagination. I have two wall calendars on CafePress one a large size and the other, what CafePress describe as "Oversize". last, not least, there is one on Zazzle.com which has the same artwork but is just a different size and format. If Poe's gothic horror stories are not your cup of tea perhaps I can interest you in a Pre-Raphaelite Beauties calendar. This features paintings from a selection of artists who painted in the Pre-Raphaelite style - including Rossetti, Burne-Jones, Millais and Waterhouse. The Pre-Raphaelites are enjoying a resurgence of interest as a result of the opening of a new exhibition at the Tate Gallery in London, the first major event of its kind in almost 30 years and I have decided to mark the occasion with some calendars devoted to the works of some individual artists who painted in that style. The first of these is devoted to the work of Gabriel Dante Rossetti and includes an interesting cross-section of his paintings spanning several decades.
Posted by Neil at 7:10 PM

This is long overdue - almost 3 years to be precise - but better late than never! In that time there have been a few new folders of images which may be found in the buildings section 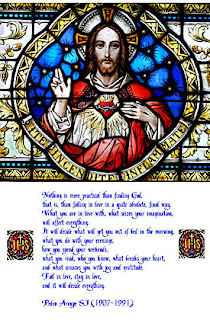 which is to be found at the bottom of the home page. We also added an ornaments page and will shortly be updating our calendar offering. The very latest news is the creation of 2 new stores on CafePress. Both have only tenuous links to stained glass but you might wish to take a look at them. The first is dedicated to Victorian art, in particular the work of the Pre-Raphaelites. As you will be aware Burne-Jones was a member of that group as well as being a prolific designer of stained glass through his partnership with William Morris who also had ties to that group. Similarly Ford Madox Brown and Henry Holiday are generally associated with the Pre-Raphaelite school. In the new CafePress store you will find some gift items incorporating details from important works by Gabriel Dante Rosetti, Edward Burne-Jones, Millais, William Waterhouse and others. It is not an extensive collection but they are beautiful images. The second is a departure in a very different direction. The store is called Poe Corner and, you guessed, the subject-matter is Edgar Allan Poe and his works with special emphasis on the illustrations of his Tales of Mystery and Imagination by an Irish artist called Harry Clarke. Clarke is widely acknowledged as being one of the top 3 or 4 Irish stained glass makers of all time. His work is stunning. The designs are unusual and not everyone likes the gothic appearance of his figures but, putting that aside, no-one can deny that his windows are stunning in their overall appearance. By use of jewel-size pieces of glass and faceting as well as careful selection of glass for richness of colour Clarke achieved a sparkling effect which is rare, if not unique. The combination of the gothic-looking figures, brilliant and rich colours and sparkling effect makes Clarke windows unmistakeable. Now, in addition to his stained glass work, Clarke was also a book illustrator and probably his most famous illustrations were of 2 editions of Edgar Allan Poe's Tales of Mystery and Imagination. The first 24 images are black and white line drawings but he later supplemented these with some colour plates and they are a perfect match for Poe's grisly, macabre and frightening stories. It is only in the past year or so that I have become involved with the life and works of Poe but he certainly has a world-wide following and I feel sure that there will be interest in items incorporating the Clarke illustrations. Here is a link to Poe Corner Last, not least, when updating my calendar offerings I decided to design one specifically for Jesuits using some images of stained glass windows depicting some of the saints from the Jesuit Tradition. For the cover I used the above image which combines a beautiful stained glass rendering of The Sacred Heart with a prayer by Pedro Arrupe, a 20thC Jesuit. You can find the Jesuit calendar here.
Posted by Neil at 3:29 AM