The contribution by John La Farge to the development of American stained glass-making was immense though he is far less well-known than his rival and contemporary, Louis Comfort Tiffany. Glassmasters have produced several authorised reproductions of La Farge works and this is a personal favourite of mine called, simply, Butterflies and Foliage.

This is what finally went out:

War Story With a Difference

Verona, NJ (PRWEB) November 9th 2004 -- On Christmas eve, all around the combat zones, services will be held for US and Allied troops, airmen and their support personnel. These services are usually held in large buildings, without character, which have to serve as briefing rooms, hangers, movie theatres and, sometimes, places of worship. They are almost invariably spartan and lack any of the decor usually found in a place of worship.

This year things will be different, thanks to the efforts of a US Air Force chaplain based in Kyrgyzstan and a New Jersey-based photographer and stained glass enthusiast. Though they have never met and are living thousands of miles apart, these two are working together to create a slide-show which will be used at Christmas services not only at the Manas USAF base in Kyrgyzstan but potentially at every base in Iraq and neighbouring countries, in Afghanistan and even onboard US Navy ships around the world.

It was Fr Tim Butler who came up with the idea of projecting appropriate images onto the base?s 30-foot screen in order to give more meaning to the usually bare space which they would be using for Christmas worship. He contacted Neil Ralley whose website (http://www.stainedglassphotography.com ) has literally hundreds of images of stained glass windows, many depicting Advent themes, and Mr Ralley immediately agreed not only to give free use of his images but also to donate his time to create the slide-show for them both to distribute.

About Fr Timothy Butler:
Fr. Butler has been an active duty chaplain in the Air Force for over 10 years and a priest ordained for the Archdiocese of Boston for 15 years. He is currently performing a 4-month tour of duty at Manas base in Kyrgyzstan.

About Neil Ralley:
Ralley created and launched the website Stained Glass Photography (http://www.stainedglassphotography.com ) in 2002 to provide free access to his photographs of vintage stained glass. The site became a Yahoo (NASDAQ: YHOO) ?Pick of the Day? barely a month after it was launched and has attracted a significant following. Ralley strongly believes that stained glass represents an important part of America?s artistic heritage which is at risk and that it should be properly documented as well as being preserved for future generations. 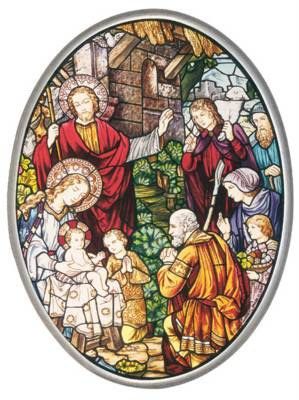 Nativity scene by Glassmasters based on a work by Zettler of Munich. Which can be purchasedhere.

The Election is over and the Holiday season begins

The pundits and pollsters are still trying to understand what happened with the election result and why even the usually-accurate exit polls on the morning of the election itself simply came in with the wrong answer.

The concensus which is emerging is that a substantial body of voters from middle-America, perhaps including people who don't usually bother to vote, became motivated to vote against gay marriage and for Bush. The election is hailed as having been won (and lost) on moral value issues rather than the expected economic and security considerations which both campaigns fought so hard over.

Anyway, for better or for worse, it is behind us now and the countdown to Christmas begins in earnest. For anyone 'out there' who is waiting to order something from this website with Christmas in mind NOW is the time to act - not next week or the week after and, PLEASE, not the week before Christmas itself!

In addition to our 'Frameable Art Cards' the Glassmasters and Stonemasters collections include some great gift and decorative ideas. However, to minimise the risk of disappointment, if items are required before Christmas the orders should be placed as soon as possible. Please understand that it is not just a question of shipping times, in the case of cards we often make these to order and when we get a large number of orders the lead-time increases. In the case of the Glassmasters items if a particular item sells out in November the chances are that new stock will not be available until early in the New Year.