We took a chance and issued 2 press releases - on the one hand news editors have other things on their mind around Thanksgiving time but the flip-side is that there is not so much news around so that sometimes things stand out more. Speculation is pointless, however, and the only real test will be whether someone runs an article and/or our traffic gets a bump up.

Here are the links anyway: War story with a difference

First of all let me say that this week I finally had the opportunity to see and touch some of the items which I have been creating on CafePress - and I do not mind admitting that it was a relief.

When creating 36 calendar pages (and 3 covers) using scans from original slides it is all too easy to overlook a scratch or a stray dust-particle. Even if nothing of that type slips through there is a chance that something could go very wrong during the printing process and how can one be sure that the file I uploaded here in New Jersey will look the same in terms of colours when printed in California? There are SO MANY things that can go wrong in that whole process and yet, amazingly, when I took delivery of the first calendars on Tuesday and then on Thursday they looked exactly as they should and the colours are absolutely SPOT-ON.

I will admit that I would prefer the paper to be just a teensy bit heavier and the binding with fairly light-duty staples is not my preference but this is publishing-on-demand and we have to make some allowances. Anyone who buys one of these calendars needs to understand that they are getting something truly unusual and different. These photographs are previously unpublished other than a few prints and cards which I have had done along the way. To the best of my knowledge no-one has ever published such a detailed study of the Vanderpoel window at Trinity Episcopal Church in Saugerties as may be seen on my 2006 William Morris Wall Calendar.

The other items which I got to see and touch this week were quite a number of ornaments. I was scheduled to present a slide show at Christ Church in Riverton, New Jersey, and quite a number of members of the congregation had pre-ordered sets of 8 ornaments created from 8 of their windows. I have to say that everyone I have spoken to who has seen these ornaments likes them. OK they are not actual stained glass but the designs from stained glass windows lend themselves quite well to this form of presentation. Although the obvious use is for christmas tree decorations it is by no means the only one. At Riverton there was talk of displaying them in shadow-box frames and, in the case of patron saints, even perhaps being worn as pendants.

I will definitely consider offering some selected designs for purchase from this website with either free or reduced shipping and handling.
Posted by Neil at 8:24 PM

At the suggestion of Lily Hodge from the New Jersey Historical Society I made contact with the First Baptist Peddie Memorial Church (which I will from here on shorten to FBPMC, or maybe just Peddie) to see whether they might allow me to photograph their windows.

The domed building was dedicated in 1890 and is said to have the most windows by Tiffany Studios of any church in New Jersey though most are geometric designs and so it does not has the same reputation as some other churches in the state which have large figural or pastoral works.

An extensive resoration of the windows has been undertaken in recent years by Barbara Meise (Artbuilders) and when I visited last week I noticed that one of the figural panels in a 5-light set is presently absent and being worked on.

In addition to the windows there is some other interesting artwork including some wall-reliefs and some curious looking gargoyles looking down from the gallery which surrounds the main worship area.

When I visited last Wednesday I was fortunate in being able to meet the Assistant Pastor, the Reverend James S. Kang, who coincidentally shares my interest in photography and had been considering photographing the windows himself. I am hopeful that the Rev. Kang will be able to persuade the committee which deals with such matters that having me photograph them, at no cost, in return for allowing me to use the images could be a win-win situation.

Rev. Kang has written a very fine and moving article about his ministry with the homeless which I commend to anyone, particularly at this time of year when those of us who are more affluent tend to over-indulge and sometimes lose site of the plight of those less fortunate, such as the homeless of Newark. Here is a link to the article by the Rev. James Kang

At this time I know very little about the windows and have only paid them a brief visit but hopefully I will get the opportunity to learn more about them in the coming weeks.
Posted by Neil at 7:58 PM

The launch of the CafePress Affiliate programme has created an interesting new fund-raising opportunity which churches and other non-profit organisations should consider.

CafePress has been in business for over 5 years and has always been a potential source of fund-raising for any organisation with the resources to upload designs and make available t-shirts, mugs, posters, cards and other gift and household items with appropriate slogans or logos or other artwork. All that the organisation needed to do was create items in the CafePress system, set prices and then persuade people to buy them. Any money in excess of the CafePress base-price would be credited to the account of the organisation and would be payable approximately 6 weeks later.

What has changed is that with the introduction of the new Affiliate Programme it is no longer necessary to create the items, it is now possible to make money by promoting and selling someone else's items. The programme is about as simple as you can get - all that an organisation (or individual) needs to do is open a CafePress account (which costs nothing), sign up for the affiliate programme (also free) and then paste a link with a special code which identifies the organisation as the referrer onto a website or into the text of emails. The organisation will then receive 20% of any sales on CafePress coming from people arriving via that link.

To give an example, supposing that a church considers it appropriate to suggest to parishoners that they might consider buying Christmas cards or ornaments from our store at CafePress then all that they need to do is join the affiliate programme and have a link placed on their website or sent out via email or even just printed in the church bulletin. If any sales result then the church would get 20% of the proceeds. The price that their members pay is just the same as if they had found CafePress by accident the difference is that CafePress (and ourselves) would be contributing a portion of our profit as a 'thankyou' for referring a customer.

If anyone wishes to find out more here is a link to CafePress.

If anyone requires help with this please contact me.

Here are some ornaments which we designed specially for Christ Episcopal Church in Riverton, New Jersey. The images are from the windows in the church: 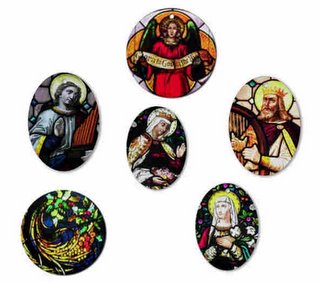 If you love William Morris stained glass then this is the calendar for you!

These designs are from the first stained glass commission in America by the William Morris company and include original works by Edward Burne-Jones, Ford Madox Brown and Morris himself.

Also included are some details about the designs such as who created them and where else they have been used. 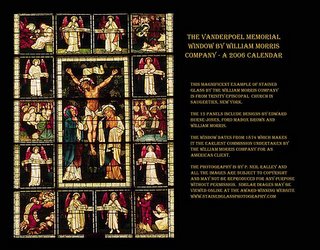